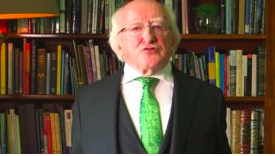 OK, now that the debates are over and the names of the also-rains begin to fade from our memory and Michael D girds his loins for another seven years in the Phoenix Park, are there any outstanding questions?  Dozens, I expect. But here’s five of mine.

View all posts by Jude Collins →
Do you know whose anniversary it is today? Do you care?
LAPDOG   BITES   BULLDOG (14) by   Perkin   Warbeck