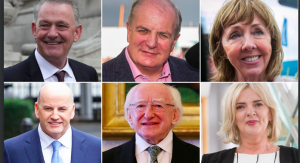 You could talk all morning about the result of yesterday’s election – that’s exactly what they’re doing on RTÉ Radio One at this moment – but there are a few points worth extracting from results.

Final thought: In future presidential elections, we should pin candidates down. What one big thing will you do in your first year? Your second? Your third? Etc. As things stand, Michael D burbled about giving lectures at universities and having a vision of Ireland, Casey talked about Travellers refusing good homes, Joan Freeman talked about Wellness, whatever that is – and on it went. An Irish President may be limited in his/her powers, but s/he must have something to contribute to the life of the nation. It’d be nice if they told us before taking possession of a vast mansion, a vast salary and a vast pension.

View all posts by Jude Collins →
OLD ROPE PART 3. THE HUMOURS OF THE (LONDON) TIMES  by Donal Kennedy
Saturday pics of the week