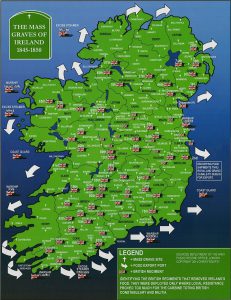 To The New York Times
CC: Christopher Fogarty
Oct 19 at 2:28 PM
The New York Times (10/18/18) Opinion article by Megan Nolan; “I Didn’t Hate the English – Until Now” seriously misinforms readers by perpetuating the Irish “famine” falsehood. Ms. Nolan’s belief that it was a famine is understandable; that is what we were all taught in schools, as was I on both sides of the Atlantic. But, if famine, why the hatred?
The perpetration of that genocide of 1845-1850 required the deployment to Ireland of more than half of Britain’s empire army (67 regiments of its 130-regiment total). This information is available where I discovered it decades ago while researching the life of my grandfather Kieran Fogarty (1839-1924), at Britain’s Public Record Office, now renamed The National Archives, in Kew, Surrey.
Believing it was a famine, I was shocked to learn that the 40th Regiment of Foot that Grandda joined (1857-1881) had, when he was between six and twelve years of age, forcibly removed the abundant and varied food crops of south County Galway to the Port of Galway for export. I pursued further, and acquired certified copies of the original, hand-written “Disposition of the Army” records for each of those six years. They show the dates and years that each of those regiments entered and exited each garrison town in Ireland; thus anyone with relatives in Ireland then can know which British regiments starved them.
My first findings were distributed in pamphlet form with map of Ireland showing each regiment where it served at least one deployment, and the locations of some 180 of the “famine” mass graves they left behind. These were later posted on the Internet. When they failed to silence “famine” writers I put my later, comprehensive, findings into book form – The Perfect Holocaust.
The food removals were usually initiated by the English-officered, carbine-toting constabulary. When they met resistance the local English landlord’s militia were summoned. When both met resistance, the nearest British army regiment was summoned. They never failed to remove the food.
As that genocide neared its end, in 1849 a grateful Queen Victoria conferred on its commander-in-chief, General Sir Edward Blakeney, a prestigious Order of the Bath. So much for “famine.”
Christopher Fogarty
900 N. Lake Shore Dr.; 1507
Chicago, IL 60611

View all posts by Jude Collins →
What do the Tories really think of unionists?
POSERS, PROPHETS, TOMMYROT AND POPPYCOCK by Donal Kennedy