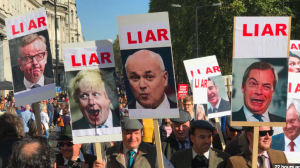 Well. That’ll give them something to think about, won’t it? . Nearly 700,000 people demonstrating in London, protests in other cities as well, including Belfast. The politicians will realize that Brexit is deeply unpopular, consult their constituency figures and start to consider calling the whole thing off. Oh, and the moon is made of white chocolate.

Remember back in the early noughties? When people throughout these islands took to the streets in even greater numbers, to get Tony Blair to turn back from a futile war in Iraq? It was a magnificent display of public anger and it achieved less than nothing. Blair and the rest went ahead and tens of thousands of people died.

So will yesterday have impressed Theresa May? It’s doubtful. She’ll have weighed up the thousands on the street against the one million plus majority that the Leave lot won in the referendum, and she’ll press cluelessly on.

So what are the chances of having a second referendum? Next to nil, in my view. The only hope there can be is that May will be pressured into holding a general election and that Jeremy Corbyn and Labour will finally take a deep breath and say”We want to stay in the EU!”, albeit an EU that will require fundamental changes to make it  responsive to the needs of its less powerful members.

That will be, as they now say, a big ask, but it’ll be better than the spine-breaking situation citizens will face if the Tory crazies have their way and drop the nuclear bomb of Brexit. The Brexiteers in the House of Commons will have things worked out so they’re protected from the fallout – witness Jacob Rees-Moggs moving considerable parts of his business to the south of Ireland – and the rest of the working population will be thrown on hard times not seen since the Great Depression.

The Tories won’t save us – they’re too busy cannibalizing one another. Our only hope is Labour; and while I admire Corbyn’s plans for real socialism in Britain, I believe he’s making a fatal mistake by dithering on the sidelines. Man up, Jeremy. You’ll be well rewarded if you do.