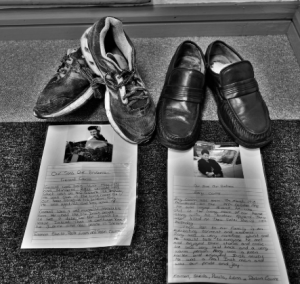 “When sorrows come, they come not single spies, but in battalions”.

Twenty-five years ago this week, Shakespeare’s words were truly appropriate. The horror of the Shankill bomb was followed by the bloodbath at Greysteel. Many of us could recite the names of those killed in both incidents; in contrast if I said the names of Gerard and Rory Cairns, would that mean much to you? Perhaps not. But they too died during the same week – in fact on this day twenty-five years ago.

The two young men were in their own home on the Slopes in Bleary, Co Down. Gerard was 22, Rory 18. Their young sister Róisín was celebrating her eleventh birthday on that day, 28 October 1993. When the masked UVF gunmen entered the house by the back door, one of the killers put his finger to his lips, indicating to the young sister she must be quiet. They then went into the living room and shot dead both brothers. The UVF claimed they were IRA men. Intelligence information that was reviewed by the former Police Ombudsman Nuala O’Loan and the Historical Enquiries Team (HET) revealed this to be a lie.

Not only were Gerard and Rory Cairns not in the IRA – the investigation of their deaths left troubling loose ends. The day they were killed, neighbours reported higher than usual levels of British Army and RUC checkpoints in the area. The local priest, a short time earlier, had reported being followed by a car that was found to be registered to Robin Jackson, aka the Jackal, a notorious loyalist paramilitary and suspected double agent. A neighbour of the Cairns claimed to have seen Jackson in a UDR land-rover a few nights before the Cairns brothers were killed. And there were anonymous callers to the police who claimed to have seen loyalists Robin Jackson and Billy Wright in the area on the 28 October.

The father of the two dead youths, Eamon Cairns, told the Police Ombudsman of his belief that the RUC and the British army were involved in the killings of his sons, and that they made made it possible for the killers to get away after their attack. British Army deployment maps show that there were Army checkpoints on every access road to the area in and around the time the two youths were shot dead.

Police Ombudsman Nuala O’Loan rejected this claim but accepted a second, that the police investigation lacked determination. The Historical Enquiries Team (HET) reported on the killings and concluded that there was a failure to collect forensic evidence from the Cairns home and garden, RUC Special Branch did not pass on its intelligence to the original investigating team, and that forensic evidence from the killers’ car had been ‘lost’ from Lurgan police station. Interview files connected to the case also went missing.

As with many other sectarian killings, the deaths of Gerard and Rory Cairns brought crushing grief to the family and a conviction that those who investigated the killing were not performing their duties because they were, actively or passively, complicit in the killings.

Today the Cairns family and friends will be grieving, but there will be no news headlines for the two dead young men, few sympathetic interviews with relatives, few words of encouragement that the truth about their deaths and about the quality of the ensuing investigation will ever be known.

All deaths during the Troubles bring equal grief to those who mourn. But while the media choose to remind us of some, others they largely ignore. Maybe stop today for a moment, think about and say a prayer for two innocent young lives brutally snuffed out and forgotten by all but those who loved them.