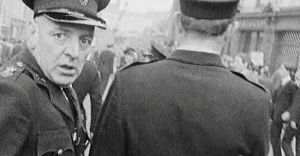 October 5, 1968 – exactly fifty years ago today – members of the RUC attacked a civil rights march in Derry. If you were a media student and looking for an example of the power of television, you wouldn’t need to go any further. As October 5, 1968 headed into twilight and night, everything had changed. The world saw the reaction of the Northern Ireland state to people who looked for civil rights. Not a united Ireland – just equal rights. And it was not a pretty picture.

If you watch the black-and-white RTÉ film of that event, you’ll see repeated ugly scenes. In particular you’ll see a sequence where a policeman strikes a young man, who makes a run for it; the policeman pursues him, and in his enthusiasm of beating, his RUC cap falls from his head. He doesn’t let that stop him laying into the young man.

I was living in Canada at that time, but the events crossed the Atlantic, thanks to RTÉ. That’s not to say that there weren’t voices in the Canadian media who did their best to exonerate the RUC actions of the day. In later decades as it happens, I got to know both men – the attacker and the attacked. I found I liked both.

Isn’t that strange? The attacker should have been classified as a brute, the attacked as a helpless victim. And all of that is true. But at the personal level, and with some distance between him and the events, the attacker was a warm, intelligent man, full of information and ideas on all sorts of topics, especially the history of the Scots-Irish in the US.

Much is talked of how Martin McGuinness was drawn into paramilitary violence because of the RUC and British army violence which affected his community. Less has been made of what it was that led  members of the RUC to such savagery on ordinary defenceless people. Maybe  the RUC man that October 5 day had been taught to beat out of existence what he saw as a threat to law and order. Maybe he simply lost his temper and used his superior strength. We’ll never know.

People are multi-faceted. We all have sides to our nature that we have to struggle to keep in check. And even when we have been guilty of a brutal act, maybe there is a human side which, in different circumstances, would have had room to show itself. Certainly we are sometimes surprised by the things we find ourselves saying and doing.

The RUC on that day found themselves letting the brutal side of their make-up slip the leash. And because cameras were there, a sense of revulsion filled those who saw on their screens what had happened in Derry. So if you’re searching for a day on which the tipping point into violence came to the north, this day fifty years ago is probably as good as any. There were many other instances of the guardians of the law acting lawlessly, but few – to that point at least – in such a public manner. Men who in other circumstances might have acted honourably chose to act savagely. It proved to be a very very bad choice, the repercussions of which buffet us even to this day.

View all posts by Jude Collins →
Unionism and how to terrify yourself
Danger: disaster ahead