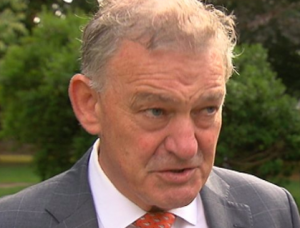 You’ve probably heard comparisons drawn between Peter Casey, the recent Presidential candidate, and Donald Trump. Both becoming popular suddenly and dramatically against all the odds, both zooming up the polls on the back of an attack on a minority group, both tapping into something in the population that other politicians or would-be politicians have avoided, and which they condemn strongly when Casey/Trump identifies this group, explicitly or implicitly,  as The Enemy.

I think comparisons with Trump are a bit harsh. Peter Casey doesn’t wear make-up all the time, he doesn’t have small hands, he hasn’t promised to build a wall, he hasn’t approved of his followers beating someone up. He also has the ability to lightly mock himself, and the thought of having a pint with him, unlike with the Donald, wouldn’t send the average citizen into convulsions.

So what was Casey at? Well, attention in the first place. When you’re at 2% in the polls, you need to get the public’s attention – and he did that. Zoom – that was Peter going from 2% to 23% inside about ten days.

The second thing is to find something which is widely believed or felt but which the mainstream media pretend isn’t there. Casey chose the Travellers. We all know that there is a massive prejudice in the Irish people against Travellers. Remember the farmer in the west of Ireland who waited for an intruding Traveller, then shot him twice: once when he arrived, and the second time as, wounded, he tried to run away. Respectable media expressed horror; wide swathes of the rural public said or thought “Good for him!” As for the idea of penalizing a man who shot a Traveller who had trespassed on his land: sheer bunkum. Hadn’t he every right?

Most Irish people don’t know an individual Traveller, have never held an extended conversation with a Traveller, would be in a panic if a Traveller family moved in next door. Many Irish people think the Travellers have plenty of money – “Sure look at the big cars they drive! Look at their caravans! No wonder when they don’t pay taxes.”

Most of us don’t like to think of facts like those. We prefer to pay attention to Casey’s comment that they wouldn’t take fine houses offered to them because they couldn’t have stables for their horses. (That was untrue: what they wanted was a field where the horses might graze.)

Casey is an affable man, who doesn’t mind saying the outrageous thing (“I want to become Taoiseach”) and watching how some are outraged, others chuckle, and many more admire his brass neck. It also wakens a little nervous memory: who else was it who’d never been in politics before, who said one outrageous thing after another, then defied every pundit by realizing his political ambition? Yes, D Trump Esq.   But before we fall over ourselves condemning Casey as a demagogue, we might want to ask ourselves why we allow Travellers to go on living lives that are clearly a long way below what a civilized society should tolerate.

Footnote: I knew Casey’s father. He was the bursar in St Columb’s College in Derry, when I was a boarder there. He was known as ‘Flash Casey’ and wasn’t very popular. But then he hadn’t located an underclass and denounced them as scroungers.