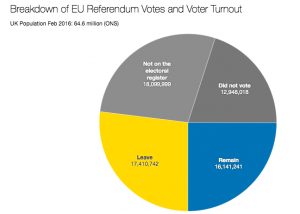 How do you feel about your boss? Or how did you feel about him/her when you were working? I’m going to risk an assumption and say that, if you’d had the chance to replace him/her with someone better, you’d have grabbed it. Me too.

Odd, then, that we don’t take the same line in politics. Politicians are the ones who make the big decisions about the world in which  we live – war, peace, education, health – you name it. Yet we don’t seem to mind who’s in charge. No, let me rephrase that. If you’re reading this blog, you probably do care about politics. But an absurdly high number don’t.

For example, much was made in the UK of the clear majority voting to leave – 52% to 48%. It was hailed as the biggest turnout in a British referendum, if not election, ever. But the fact is that while Brexit Leavers won the vote by over one million, nearly thirteen million voters didn’t bother to turn up. They could have decided who would be their boss and they didn’t bother.

The US is even worse: roughly every second person entitled to vote didn’t bother to do so in the election that carried Donald Trump into the White House.

Why do so many people not care who is their political boss? The usual mantra is “They’re all the same – a bunch of crooks.” Maybe that’s right – although it’s hard to believe that in every election, the candidates are all equally crooked. You might want to view some of the RHI hearings and consider if all politicians at Stormont are equally crooked. Some are, others aren’t. So why do so many people sit on their fat or bony arses and not bother?

Here’s my guess as to one main reason: the media. If you’re talking about the mainstream press, you can be sure you will get a warped picture of how politicians of various hues are doing. When’s the last time you read an editorial or an op-ed in The News Letter which praised Sinn Féin or a single Sinn Féin politician? You might say the mirror image is The Irish News – unfortunately I’m not in a position to say. I stopped reading the Venerable Organ (VO) when it lost its best columnist….

But to return to the serious point. A third or more of people care so little about politics they don’t bother to vote. Politicians and politics come to us day after day via the media. Our image of politicians and parties is very much shaped by what organisations like the BBC have to say, how they present different parties, what they offer as the natural way of things, the norm.

It’s clear that whatever about the accuracy or bias of what is offered the public, the media generally are failing miserably to show people that who is voted into power matters enormously. Why can’t they get this message across to so many people? Could it be that the media masters  quite like having the huge  dog of some 30% + continue to stay at home, slumped in a basket asleep?