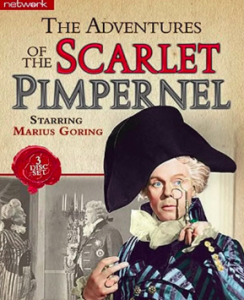 The Cock and Bull story of the MI6 man “who risked his life” visiting Nazi concentration camps smuggling British  visas to prisoners who thus escaped the Holocaust is a bigger hoax than that of Piltdown Man. You can Google Piltdown.

You may have heard the Horst Wessel lied. But he was shot aged 29 and never lied quite as blatantly or as long as British Intelligence and the British Establishment.

The original “Damned Elusive Pimpernel”  was recognised as a fictional aristocratic reactionary who rescued French aristos from the guillotine.

The MI6 “Pimpernel” was not scarlet, nor any shade of red or pink. He was a reactionary, who co-operated with the Nazis, at their invitation, when they came to power in 1933, His name  was Frank Foley. He was educated by Jesuits and was for some time a seminarian. His family had been in England since the 1820s.

Anyhow, he was based in the British Embassy in Berlin, and together with Guy Liddell of MI5, who went hot-foot from London, he transcribed, over several days,  lists of communists, socialists, trade unionists and other non-Nazis captured by the Nazis.

The venue for this work was the former Communist HQ, Karl Liebnecht Haus, named after the communist leader murdered in 1919. It was renamed Horst Wessel Haus after a Nazi thug,   murdered by a communist in 1930. Horst Wessel was a pimp and the son of a Lutheran pastor.(Horst Wessel wrote a song which the Nazis adopted as an Anthem – “The Horst Wessel Lied”.  Wessel stole the tune from the communists, as the Nazis later stole their Berlin HQ,

Prisoners were undergoing rough interrogation in Horst Wessel Haus whilst Foley and Liddell were transcribing the records there.

Anyhow the British “Security” agencies keep and still utilise the files transcribed by Foley and Liddell. It is unlikely that any security forces offer free lunches to those of other countries. It is not likely that the British did not pass information to the Nazis.

The DAILY MAIL was avidly pro-Hitler until the eve of the declaration of War in 1939. Dublin’s West British IRISH TIMES welcomed Hitler’s accession to power in an editorial precisely because of his rough treatment of socialists. A few weeks earlier it had warned those Irish voters who read it against voting Fianna Fail.

Anyhow, Prince Andrew unveiled a statue  of Frank Foley in London, on the unfounded belief that Foley risked his life to save Jews from the Holocaust. He unveiled it seventy years and a day after Count Folke Bernadotte, who HAD saved Jews, whilst serving in the Swedish Diplomatic Service, was murdered in Jerusalem whilst serving as United Nations Envoy. The murder was committed on the orders of the future Israeli Prime Minister Shamir,and was condemned in the strongest terms by the UN Security Council.

Count Bernadotte has yet to have a statue, or even a plaque, erected, to acknowledge his humanitarian work, anywhere in these islands.