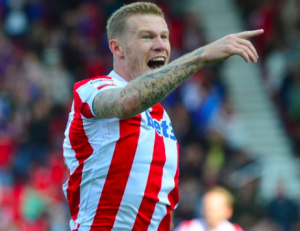 But before we jump on the Derryman, maybe let’s first ask: how sincere is the poppy-wearing of other Premier League players? I’m not sure what loyalty or respect they should have for the British armed forces. Maybe they have a family connection. Maybe the British army saved some of their relatives during the First and/or Second World War. Or maybe they were told to wear it, or else.

This last possibility is pure conjecture – I have no way of knowing. But it is striking, the near unanimity of views among soccer players in England. And even more striking, in the Tormented Green Corner (TGC), that all hands should pin a poppy to their breast.

If my guess at pressure on players and presenters is accurate, it devalues the whole worth of poppy-wearing. The symbol stops being fond respect for the British armed forces and becomes an emblem which might be worn for sincere reasons and might be worn for base reasons.

All the more respect, then, is owed to James McClean. Against an avalanche of hostility, he stands his ground and acts in accordance with his beliefs. What other attitude could any Derry person have, from a city where members of the British army slaughtered fourteen people and never spend a day in prison for their deeds?

Finally, two points. One, the poppy is worn to honour those who served in the British armed forces from (at least) the First World War. Anyone with a rudimentary knowledge of history must know that that means including some of the vilest deeds committed in army uniform. Yet if that is what people genuinely want to do, any reasonable person must respect their right to do so.

Two: if it’s OK to voluntarily wear the poppy, surely it’s equally OK not to wear the poppy? Or must we all join the baying pack who condemn McClean, or applaud the pliant media who will do anything the powers that be tell them?

James McClean: a man of courage and principle. Ireland needs such people.