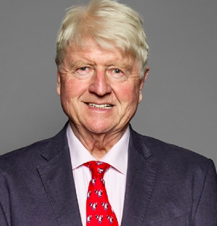 I’ve just finished reading a report on Boris Johnson’s father Stanley Johnson, and even in a world of Tory ignorance, he leaves you gawking, with the Top Gun theme song ‘Take My Breath Away’(recorded ironically by Berlin) ricocheting around in your head.

Johnson Sr was interviewed by Channel 4 from the Tory Party conference yesterday. Here’s his take on the British border in Ireland:

“This whole Irish question has been elevated into a tail which wags the dog. It’s absolutely ludicrous, there’s never been a hard border in Ireland and I’m sure there won’t be a hard border…There are plenty of countries in the EU where one country is in the EU and another country is not in the EU, and they don’t shoot each other. So why we can think that Ireland’s going to be such a disaster, I don’t know.”

Clearly, Ireland may not be the dog’s bollocks in Stanley’s estimation, just the dog’s tail.. Get the casual condescension? (Less of the language, Virginia.) And then we get the informed arch-Tory line “There’s never been a hard border in Ireland”. Stanley, Stanley. Sit down there a minute and have a glass of water while I explain. There has been a border in Ireland for almost a century now. Most of that time it was a hard border, with custom checks and searches. During the period we call The Troubles the border was as hard as any border you’ve ever known or dreamt of. And if the UK does a hard Brexit, there’s going to be one very hard border indeed in Ireland, one which will have consequences almost too frightening to contemplate, both politically and economically.

And another thing – no, take another sip of the water, it’ll settle you – another thing you maybe need to understand: there are not two countries on our island: there is one country which was partitioned at gun-point by the British – people rather like yourself, Stanley. Feeling a little less light-headed now? Good. Because I want you to tell me where in the Good Friday Agreement it says what you say here:

“It’s out there in the Good Friday Agreement. What it says is, if a conflict situation, armed conflict obviously, appears to be arising, the Northern Ireland people themselves will have a referendum.”

Can’t find the page? Ah well, not to worry. There must have been a misprint.

Anyway, you can solace in the fact that your views are part of a procession of ignorance about Ireland, an inability to grasp that the Irish people don’t like being pushed around, have a reasonable desire to run their own country without help from people like British proconsul Karen Bradley, who incidentally is right up there with you in terms of good-natured ignorance.

There has been a hard border, Stalnley. If your son has his way, there will be another hard border. And once again Britain will have allowed unionism to push it about. If you’re looking for a tail, check with the DUP. They’re the ones who are doing a crazed dance in a spotlight that will very shortly be turned off, as the absurdity of the present Westminster situation dawns on the British people.

Off you go, Stanley. Your cheeks have got back their colour now. And try to avoid Channel 4 reporters, like a good man. they’ll only expose your looniness to an unbelieving,  breathless world.

View all posts by Jude Collins →
Arlene and her bloody red lines
October 5, 1968: What was it all about? by John Patton