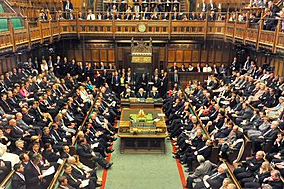 How do Tory MPs regard people from our tormented green corner? The thought struck me as I saw Ian Duncan Smith, Owen Paterson and David Trimble being interviewed, as they prepared to head off for Brussels and tell Barnier what a load of old cobblers Theresa May’s plans for UK-EU relations are. Like many another GTC politician, Trimble has found a new life in London ( cf Lord Gerry Fitt) and looked a new man: hair trimmed much tighter, glasses gone, colour not so hot-pepper red. He seemed to fit right in. Although you have to remember that he was fitting right in with IDS and Owen Paterson, neither of them the sharpest knife to emerge from the Tory drawer.

But say when Sammy Wilson stands up in the House of Commons and urges Theresa May to be true to the Precious Union, do other members of the House study their fingernails and wonder how this one ever got in? And are the DUP MPs aware that they are regarded as something exotic, strange, come from a land across the sea with their hard ‘r’s and their ‘so it is’ es?

My guess – and it’s only a guess – is that English politicians react to them the way they might if a number of white mice were to be released in the Chamber. Not that they’d wish them any harm, but at the same time the Chamber would clearly be a better place if they weren’t there.

But these white mice have gone further than simply scurrying between the benches and around the Speaker’s feet. They have got together and ganged up on Theresa May, and have pressured her into standing on a chair and inventing the phrase “our Precious Union.” The word precious, as you know, means priceless or at least extremely valuable. Does Theresa May think our GTC is very valuable? Uh-uh. Very costly, actually, and that’s under normal circumstances. And now both costly and a damned interfering nuisance. Although ‘precious’ also can be used ironically, as in ‘You and your precious bloody union!’

Something must be done. Either the backstop is implemented and stays implemented, in which case everyone will be happy. Everyone except the white mice, who squeak that that will mean they’re cut off from Mother Britain. Mice have very short memories – clearly none of them remember the Good Friday Agreement which committed all hands to accept the present constitutional position that our GTC remains in the union with Britain until the majority here decide otherwise. Why border checks between Britain and our GTC should threaten that, I’m not sure. Maybe it’s because more people would begin to see that the economic life of the island of Ireland is naturally one economic whole, and therefore it might be a good idea to make it one political whole. (Freudian slip: I typed ‘one political hole’ before correcting it just now.)

Generally speaking, there are two problems with mice, including white ones. They aren’t wildly attractive : the thought of one of them establishing bodily contact with you is just a bit yukky. The second problem is that the race memory of the white mice has taught them to be defensive. As a result, when they’re presented with a piece of cheese, like say being given access to the customs union and the single market, free, gratis and for nothing, they squeak “It’s a trap! We refuse!” and pile into a corner where they gibber and writhe and upset onlookers.

There’s only so long the likes of IDS and Paterson – both men of limited intelligence – will put up with the likes of Trimble, who is almost certainly their intellectual superior but who grates on the nerves when he speaks (No, Virginia, I said ‘speaks’, not ‘squeaks’.) And the DUP may have driven Theresa May to stand on a chair and do what the white mice seemed to want; but the day is coming when the mice will lose their ability to frighten the British government, the British government will forget it ever talked about a Precious Union (“What we actually spoke of was a Precocious Bunion”) and Theresa May will get descend from her chair, take a kick at any nearby white mice,  and turn her attention to the wart-hogs on her back benches.

View all posts by Jude Collins →
THE MAKING OF THE IRISH NATION by Donal Kennedy
Genocide vs. Famine by Christopher Fogarty