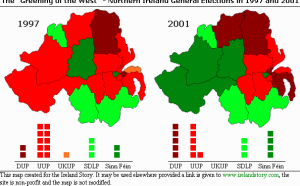 Alex Kane has an article in today’s Irish Times, where he catalogues “My top ten list of existential ‘threats to the Union’ “. (When Alex says ‘Union’, he’s invariably referring to the union of the north with Great Britain).

In ways it’s an interesting read – most lists, particularly of fears, are. He starts with ‘Ulster at the Crossroads’ and ends with Brexit, outlining the nature of each crisis. I realize that Alex has a wife and child to provide for, but he could have saved time by just saying ‘The chronic fear of unionism’.

Ever since the north’s inception, unionists have been in a greater or lesser state of fear. The state was founded as six counties rather than the nine that form Ulster so that unionism’s fear of being outnumbered by nationalism might be reduced. Since then, just about anything – a cow appearing suddenly out of a field, a bike’s back-wheel being audibly punctured, some sudden movement made by a door-to-door salesman – all kinds of everything are  calculated to send unionism into a shivering fit.

As unionists are our fellow Irishmen and women, is there anything can be done to soothe their fears? Well, it’s been tried.  Martin McGuinness spent a great part of his political life doing things that he felt might contribute to unionist reassurance. Mary McAleese spent much of her presidency inviting leaders of the Orange Order down to Aras An Uachtarain for a hooley each 12th July, while her husband Martin went golfing with Jackie McDonald and other former loyalist paramilitaries. Gerry Adams has met and chatted with Prince William, Martin McGuinness met Queen Elizabeth so often, she must have thought he was considering permanent residence in  Buck House.

Has it worked? Are unionists today less fearful than they were? You know the answer to that: it’s in unionism’s favourite word – NO.

St Augustine once wrote of humanity’s relation to God:“You have made us for yourself and our hearts are restless until they rest in you.” It’s hard not to see parallels in the feverish state of unionism. Perhaps they know that this constant watchful mode of living, seeing Trojan horses in equality, subversion in civil rights, civility masking treachery- this self-terrorism can’t go on indefinitely. The only way to end this fever of fear is to come out of the fortress and mingle as equals with the natives. Were they to do so, they might be surprised by the warmth of the welcome with which the Irish people would greet them.

Your hearts are fearful, guys, and they’ll go on being fearful until that day when you realise who you are: an integral and valued part of the Irish nation.