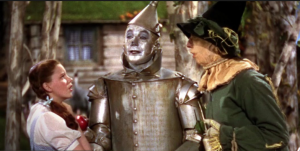 any bells for you?

“Sending someone to Coventry”  was a synonym for ostracisation. In April 1919 Ireland’s first  democratic

Parliament, Dail Eireann, unanimously decreed that the Royal Irish Constabulary should be ostracised. The

proceedings  are on the public record and available on the net. Modern commentators including Professor

Diarmuid Ferriter, who would have you believe the force was hard done by, ignore such relevant records.

But OZ-tracisation might be a good description of the recent farce. Could there be a Yellow Brick Road from

Lion (Leo, in Latin) who hadn’t got the nerve, collectively known as the Friends of the Heroine, Dorothy

Gale. They were all scared of The Wizard of Oz who proved to be a humbug.

from 1910 to 1923 collected by the Irish Bureau of Military History. A trawl through The Freeman’s Journal

(not a Republican organ) for 1920 and 1921 would blow away the humbug of Eoghan Harris, Ruth Dudley Edwards,

1913 in about 100 pages of typescript. Mr Noyk, born in Lithuania in 1884 came to Dublin as an infant, graduated from

Trinity College there and died in 1966. He is one of Ireland’s unsung heroes. The tiny Jewish community contributed

a lot to the Irish national movement in those days and served Ireland well ever since.

I will come back to accessible witnesses whose characters you may judge  for yourselves.

You can compare their records to the agenda of todays paid writers, broadcasters, academics, and pop idols.

And, hand on heart, say who are the Humbugs.