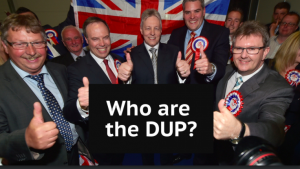 If all publicity is good publicity, the DUP must be doing handstands in the halls of Westminster. There was a time not long ago that the great British public knew the name of one DUP politician – Ian Paisley – and that was it. Not so now. Last week’s Have I Got News For You lobbed in a joke about the party and it got an immediate shriek of laughter from the studio audience. The joke took aim at the belief popular among DUP people ( hello, Nelson! ) that the world was created 6000 years ago.

As the DUP is learning the hard way, some publicity can be mortifying. If the great British public burst into gales of laughter at some of your most strongly-held beliefs, it’s so unfunny, not even Sammy Wilson could bat it away with an East Antrim witticism. The more that the DUPers insist they are just like their fellow-subjects across the water, the more open to mockery they leave themselves. A mockery which may well turn to rage at a future date.

The DUP’s big red line, written in blood, is that the party and its followers in the North of Ireland are just like Her Majesty’s subjects in Hampstead, Hereford and Halifax, and must be treated in exactly the same way – no border can be permitted in the Irish Sea. When it emerges that the DUPers really mean this, the amused contempt of the great British public may change – will change – to growls of rage.

The British satirical magazine Private Eye had an article recently headed “Arlene’s backstop balls” . In it, the Eye looks at several ways in which the north of Ireland is very unlike the rest of the UK. It starts by pointing to same-sex marriage and abortion, both of which operate in the UK but not in the north of Ireland. And both of which the DUP insist should stay in place.

It’s a bit like a boorish country cousin coming to stay. You’re a little embarrassed by their dirty fingernails and habit of breaking wind in public places. But when you find that they have manipulated things so that they’re in a position to demand money and they announce they’re staying on and you’d better pay them more money, embarrassment turns to barely controlled fury.

I’ve said it before so why not again: this all reminds me of a cartoon in the New Yorker magazine back in the days of the Cold War. It showed a miserable-looking caveman huddled with his equally miserable-looking family under a huge rock, which was held in place by a single post of wood. The caveman had one end of a piece of string-type hide attached to the pole, the other end firmly in his hand. And he’s telling a passing caveman what the rock and post are all about “It’s called MAD – Mutually Assured Destruction”, he says. “If anyone tries to enter our place, I pull the post away.”

The Soviet Union collapsed when it discovered it simply couldn’t afford to go on paying the cost of its vast nuclear armoury. The DUP will discover, when the cost of Brexit strikes home next March, that the great British public will come looking for them. How dare these damned paddies bring a financial nuclear winter on the entire Kingdom!