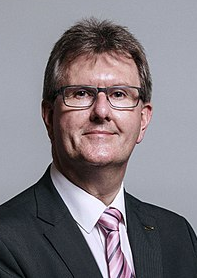 It was like watching a trusted mastiff suddenly turn  and bite its owner in the bum. Or a dead sheep being slowly turned on the spit. Totally unexpected, painful and yet hilarious.

I’m referring, of course, to The View on TV the other night. The good knight Sir Jeffrey spend what seemed like years trying to bat away Mark Carruthers’s awkward questions, suggesting that (i) the DUP had backed the wrong horse in the Brexit stakes; and (ii) the DUP were acting against the wishes of 56% + of the north’s population. By the time the good knight had laid down his lance, I was so weary listening to him I’d have agreed to anything he said as long as he stopped.

It was at that point we moved to three other guests – Ian Marshall, Tina McKenzie and Richard Hogg. Marshall is a former head of the stoutly unionist Ulster Farmers Union and a senator in Dublin (yes, indeed, Virginia – stranger than fiction). Tina McKenzie is a successful business woman. Richard Hogg represented Manufacturing NI.

Marshall said that the good knight was totally out of step with the farmers of the north, McKenzie said the Theresa May deal held real advantages for the north, and Hogg told the DUP to “get over themselves”, that the deal was more than welcome.

The one thing that political parties must never do is get too far ahead of their base or too far behind it. Sinn Féin was in danger of lagging behind its base a while back, but then Martin McGuinness told Arlene Foster enough was enough, and Sinn Féin and its base got back in synch and had a spectacular election.

And the DUP? Having insisted that it spoke for the people of our Tormented Green Corner (TGC), despite 56% of the TGC population making it clear they did no such thing, the DUP is now telling anyone who’ll listen that this deal is…you guessed it, Virginia – a Trap. This deal is a shocking Trap that will push our TGC further and further from Mother Britain. To which the farmers and business people of our TGC have responded with two fingers.

Parties can come back from apparently fatal injuries. The DUP survived Red Sky. It survived NAMA. It may even survive the RHI Inquiry. But it’s going to have one helluva job to come back, when it’s clearly at odds with its base and is intent on inflicting an economic nuclear winter on the people who voted for it. And those who didn’t.

You said it, Richard: get over  yourselves, Jeffrey and Co. There’s only so much poison you can swallow and go on expecting the other guy to die.

Crystal balls and post-Brexit: an inexact science?
FUKUYAMA, RUAIRI QUINN and THE END OF HISTORY TEACHING by Donal Kennedy