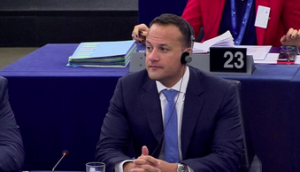 An Taoiseach Leo Varadkar is a busy man these days, what with facing up to the fevered UK and its many wing-nut MPs. But not so busy, he can’t find room for a sideways slap at his political opponents at home. And guess which political opponents/

“If they are not willing to take up their seats because they feel they can’t, because they got elected on the basis of abstentionism, they do have the option now of resigning their seats and allowing the people in those constituencies decide whether or not they want to have a say when this vote comes to Westminster.”

If insanity is the repetition of the same action in the hope that it’ll produce a different response, then Leo must be a little bit loopy. For the Shinners (and yes, Virginia, it is they!) have explained again and again that they were elected on an abstentionist mandate. Besides which fact, there are Tories in the House of Commons who would clutch their brow and collapse in need of smelling salts if they found themselves going through the same voting gate as the Shinners. The very idea that seven Sinn Féin people could cut the Brexit knot is laughable. As to resigning their seats: I hereby call on the Fine Gael party to resign their seats and let a political party committed to the reunification of Ireland to take their places. There’s more chance that Ireland will be reunited by December 11 than that May’s bill will be passed on the same date, with or without the presence of the Magnificent Seven.

People supporting the bill like to say “Well, it doesn’t give us everything, but…” One of the big buts is that while it allows for a seamless trade border in Ireland, it doesn’t allow for a seamless services border. The Human Rights Commission in the north gave a good example of what that means a few weeks back. A woman from Fermanagh was working in Monaghan, crossing the border daily with her child, which she put into a nursery in Monaghan. Since she qualified for government support, she put in all the expenses when she returned to Fermanagh. Uh-uh, the body presiding told her. You can’t get support because you received the service in another ‘country.’ Only with the protection of human rights, as part of the EU, did she get the authorities to cough up the money she was entitled to. That’s just one little example of what people here are going to face in terms of rights, even if May’s bill does go through.  And while we’ll be Irish citizens, and therefore EU citizens, we won’t have any MEPs or be allowed to participate in European elections.

England (and maybe Wales) have three alternatives. They can go for the hard Brexit that such as Alexander Boris de Pfeffel Johnson urge, they can go for May’s bill which will provide a situation much worse than we currently enjoy as EU members, or they can look at these two alternatives that will create terrible damage or considerable damage and ask themselves “What the hell would we do either of these for?” and push for a second referendum that saves them from slashing at themselves to ribbons with a razor-sharp bill-hook.

I wonder would Leo Varadkar , since he’s handing out advice, consider handing out some think-again advice to Britain? Or would he feel that wouldn’t be good manners?