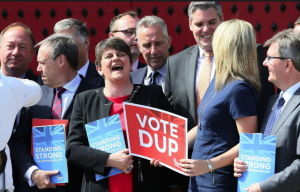 So what did you ask Santa for? Maybe a reunited Ireland, in which case you’ll be feeling disappointed – certainly if your note ended “And I want today, Santy!” It’s a day later and we still don’t have a reunited country. But if you framed your request in a more patient form – “Dear Santy, can you give me an IOU for a reunited Ireland?” you probably hit the button.

Let’s take the south first. In today’s Irish Times Letters page, there’s one Kevin Nolan who insists that a no-deal Brexit will be largely the fault of the southern political parties. He thinks the backstop is a stupid obstacle.

“If the economic prosperity of this country suffers because of a no-deal; it will have been the Irish Government which will perpetrated that act upon its own people – to safe guard nationalists living in another country!”

Now there’s possibly a little bit of ambiguity here. Mr Nolan may be referring to the nationalists living in England, who are indeed living in a different country. But if he’s talking about the nationalists of the north as “living in another country”, we may be disgusted but we shouldn’t be surprised. There are a lot of Mr Nolans scuttling around south of the border.

But there are also a lot of nationalists living in that state (no, Virginia, I said state).  A poll last year found 65% of people would favour a reunited Ireland in a referendum. There’s no reason to believe that percentage has dwindled over the past year. Young people in particular, goaded by the prospect of what for them would  be the first partition of their country and by the Neolithic nutters of the DUP who think that the rising demographics shows, not that they must make friends with nationalists but that they must pull up the drawbridge and batten down the hatches – faced with the like of that, young people in the south don’t see the north the way their parents did.

In the north we have of course the unionists – DUP and UUP. Like the SDLP, the UUP is a party bleeding to death; the DUP is a party in denial of the demographics that say they are doomed if they don’t start recruiting Catholics/natonalists at speed. In short, the backing for a reunited Ireland in the north is big and, thanks to Brexit, getting bigger. The backing for a reunited Ireland in the south is clearly there, in large measure due to the spotlight that Brexit has shone on the DUP. People in Britain sort of knew what kind of a party this was, as did people in the south of Ireland. But new information emerging from DUP statements on the Irish language, on the need for a backstop, on their arrogant view of themselves and others, has earned the DUP a huge new viewing public, in Ireland and Britain. And the reaction of that huge new public on both sides of the Irish Sea has been “If these guys are for something, lick your pencil and put me down as totally opposed to it.”

Martin McGuinness was the best friend unionism ever had. How they must be chewing their lip and kicking the wall that they responded, not with reciprocation but surly contempt.

Believe it: 2019 could well be the year when all of us, north and south, will have an opportunity to pass judgement on that surliness.