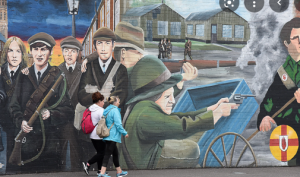 My grandfather was the most important male influence on my early childhood; he was a cooper and my recall of him working in his shed remains  vivid. My memories of Derry at the time are of walks by the Faughan where he fished  and visits from his brother , Paddy , with  his paper bag of Jacob’s fig rolls.

Kenneth Branagh’s engaging movie , ‘Belfast‘,  dips into the sensory memory of Buddy, the young film-maker; it is an elegy to a Belfast childhood where family is strong, movies are a great escape but murky, , sinister undercurrents  lurk in his neighbourhood. It is essentially a film about the innocence and banality of childhood; the attraction to a smart, wee girl in the class , peer pressure from an older head and the intrigue of religion. Some commentators have been critical of the Branagh version of political history; they are setting up their own cock shots and not the film that was produced. The film-maker set out to create a childhood memory of troubled times and difficult choices and,  for the most part,  he succeeds in capturing that spirit.  The failure of a state to protect its citizens is dramatically portrayed in black and white but quite correctly the underlying issues are not explored;  we are seeing events through the eyes of a nine year old.

I was a student in Belfast for four years  but was never really part of a local community although with   friends I shared a house which had the working class character of that in the  film.  I visited the City briefly last year and it is clear that many of those areas still exist sixty  years on. It is a pity that Branagh didn’t make more use of them as the film leaves  an impression of a pristine movie set.  The script was well acted  although I did question the casting of Judy Dench ; there is a huge number of fine, Irish actors who could have played that minor role more convincingly.  The frequency of Pa’s visits home from England seemed in contrast to their economic straits. However, some licence must be granted to the author to progress the narrative and address the old question – Do I stay or leave?.

This generously lyrical interpretation of childhood memory is a welcome addition to films about Belfast.