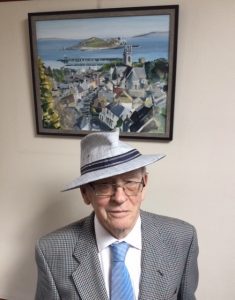 In the 6th century AD, the sainted poet Colmcille wrote that it was sweet to be on Ben Eadar. He was referring to Howth Head which features large in poetry, mythology and the history of Ireland.

In the 9th century, exactly 1201 years ago in 821 AD Viking raiders gathered together in a place they named “Hoved” meaning “Head” Some of their descendants undoubtedly still live in Howth, probably in keeping with the maritime culture of the Vikings, belonging to today’s fishing community.

From the fjords of the North
The fogs belly forth
Like sails of the long ships
That trouble the earth.
They stand with loose sail
In the fords of the Gael:
From Dark Pool to White Ford the surf-light is pale.

The chronicles say
That the Danes in their day
Took a very great prey
Of women from Howth.

I lived from December 1941 to November 1964 on the Hill of Howth, and as a baby, when people in England were reduced to using powdered milk, I was being fed on goat’s milk, bought from the tiniest of farms on the cliffs edge, and on fish caught by trawlers nearby.

By sheer happenstance, after an absence from Dublin for six years, on Saturday April 9, I sat on a chair 100 yards from the cottage where  my mother used to buy milk, on a plastic chair three rows behind Uachtaran na Éireann, Michael D Higgins, his wife Sabina, various politicians and the Chief of Staff  of the Irish Defence Forces

During World War II the Irish signalled their wish to be non-participants, by spelling the word EIRE in whitewashed stones over high points on her coasts to indicate to belligerent aircraft crew that they wanted no part in their war. Each sign was accompanied with a numeral in white washed stones, so that the pilots would know in which direction to head,  thus finding their  way home safely without endangering neutrals.

On Howth Head, on the North Arm of Dublin Bay, from 1945 onwards the ‘Eire’  sign was progressively covered over by vegetation, sinking out of view until a gorse fire partially uncovered it in the 1980s.

Somebody recognised its significance and over the years local groups set about clearing the site with the aim of its restoration to its pristine glory.

There were about four anti-aircraft batteries around Dublin Bay during the war, and only two others in the State. One was about  400 yards from the sign.

The  State,  had no arms industry and was forbidden by its former occupier from purchasing arms other than from Britain. And Britain was not anxious to sell many  to  Ireland. Poor, and depopulated after nearly 700 years of British occupation, the Irish were reliant on their wits to merely survive during World War II, even when not re-occupied by their old enemy, nor invaded by new ones.

They not merely survived , but thrived, for both leaders and other citizens matched wit with backbone.

The restoration of the “EIRE 6” Sign and its unveiling as a National Monument was planned and scheduled long before the current Emergency in Europe, and fortuitously, it fell on President Michael D. Higgins to do the unveiling.

A simple ceremony included the Presidential Salute, an air on the uilleann pipes by a local, maestro, short speeches by those involved with the project, and a superb speech by the president, in Irish and English. He called for less bellicose rhetoric from politicians, stressing the constructive role which can be played by neutral nations in persuading warring ones to settle disputes by diplomacy.

He was, of course following principles which the electorate had pledged the State to, when they enacted the Constitution in 1937 together with practices adhered to most notably by Éamon de Valera and Frank Aiken over many decades.

View all posts by Jude Collins →
MUSINGS ON THE PICKLE WE ARE ALL IN – by Donal Kennedy
Jim Allister : a lone warrior