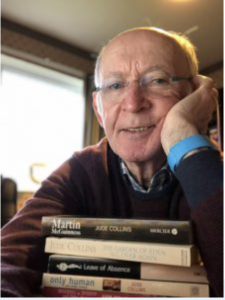 A blind man or woman on a swiftly-galloping stallion could have noticed how presenter Mark Mallett hacked off a red-meat chunk and tossed it  to the anti-Sinn Féin parties in last night’s UTV debate. Eager to provide a counterweight for the DUP and the UUP’s refusal to say they’ll accept the will of the electorate, Mallett drew attention to a letter Declan Kearney, the Sinn Féin chairman, sent in 2020 to Saoradh, the political voice of the New IRA. In it he urged them to work alongside Sinn Féin and others to find ways to bring about a border poll.

Naturally, Jeffrey Donaldson and Doug Beattie fell on this red meat and denounced Sinn Féin for having anything to do with Saoradh. Naomi Long did likewise, and Colum Eastwood said his party would have nothing to do with these people, not now, not ever. Shock-horror all round.

The ironies (it’s another word for hypocrisy, Virginia) in all this threaten to go off the Richter scale.

Here are a couple of questions.

In February of last year,  the then DUP leader Arlene Foster, along with Nigel Dodds and Gavin Robinson, met with the LCC. In April last year Brandon Lewis, the British Secretary of State and David Frost, the Brexit Minister met with the LCC. A spokesperson for No 10 said “The UK government regularly meets with groups and individuals from across all parts of the community.”  In January of this year, Jeffrey Donaldson met with members of the LCC and a week later, the Executive collapsed as the DUP First Minister resigned. (A coincidence, Virginia? Mmm – let me think…)

John Hume, leader of the SDLP, met with Gerry Adams in the late 1980s. Despite condemnation from all quarters, Hume hung in there and eventually an IRA ceasefire, the decommissioning of weapons and the Good Friday Agreement followed.

So here’s the question: why doesn’t Jeffrey Donaldson’s nose lengthen and bounce off the far wall when he rolls his Christian eyes at word that Declan Kearney has written to Saoradh?

And why does Colum Eastwood applaud John Hume for meeting with Gerry Adams, yet pull his garments about him and declare that his party will have nothing to do, no, nay, never a thing to do with Saoradh?

Answer: it’s the election, stupid.  And there are no ends to which unionist parties (yes, of course include the Alliance party, and tag on the SDLP) will not go, no hypocrisy they will not wade through,  in order to slow down, hobble, decommission the electoral horse called Sinn Féin, which is in danger of romping home clear of the field come Thursday.

View all posts by Jude Collins →
Unionist parties and laughing gas
Is Sweden supplying Ukraine with prohibited weapons of war?  -by Fra Hughes