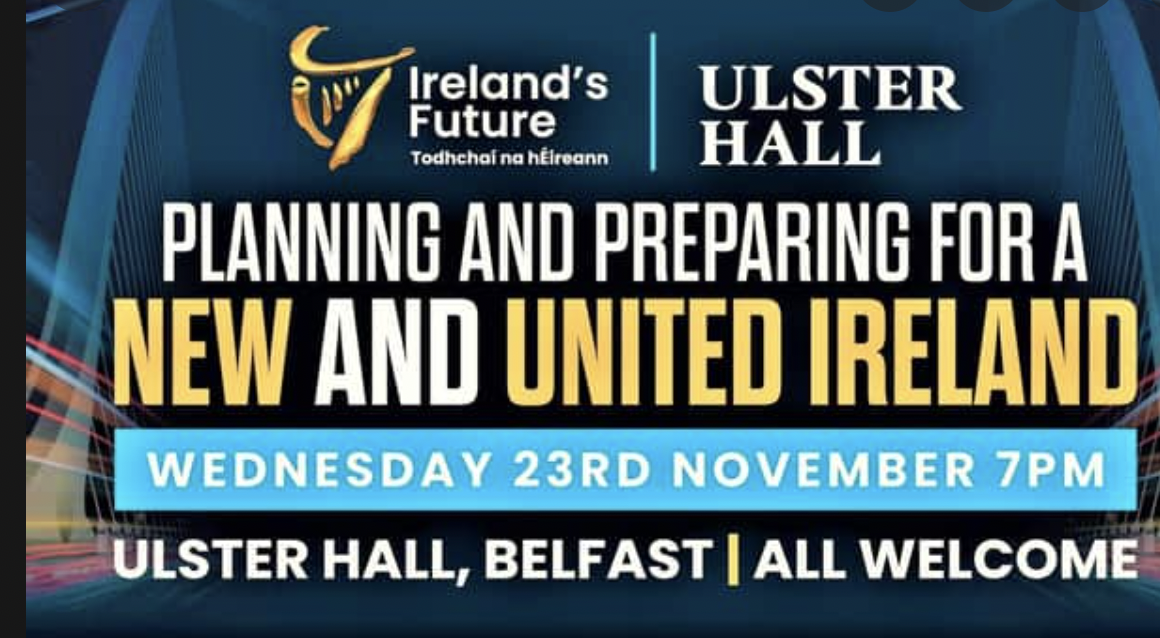 According to all those old wise bitter unionist spokespeople who, wouldn’t be able to find Dublin on the map if they wanted to attend to protest at the Irelands Future Meeting on October 1st, but who nevertheless were ready at their keyboards to denounce and attack the event as soon as it got underway, are now saying the panic is off, as the event was a big flop.

Good old Jim Allister was first out of the blocks to rubbish the meeting calling it a washout because it failed to fill the 3 Arena to capacity. Perhaps Jim should have a little chat with some of the ordinary non-political unionists who did attend the event and he might learn that the event was anything but a washout out.

I wasn’t at the event by I did monitor the news and social media on the day to see how it did go. The 3 Arena we are told has a max capacity of 9,000 seats.  The first report I got on social media news site that day, said there was 8,000 people in attendance.   Shortly afterwards, the Irish Independent online (sister Paper to the Unionist Belfast Telegraph) stated 5,000 attended the event, where virtually every other news outlet in the south took its lead from the Independent and went with the 5K figure, which I find odd as I’m sure there was more than a few media reporters present.  It’s also odd, since the few photographs I’ve seen published in the media since, namely in the Irish News, Belfast Newsletter and Telegraph and the Journal, all showed images of a packed stadium.   To suggest there was only 5000 people in attendance would surely mean the photo images we were shown would have had to display a half empty stadium with loads of empty seating, but this was clearly not the case.

Im sure Jim Allister’s likeminded allies in the media would have given an arm and a leg to have such an image of empty seats to boast to their readers and followers, but alas, all newspapers that did report on the event, including the Newsletter and Telegraph could only offer snaps of a packed-out stadium.  But in any event, even if Jim had it in him to concede on the correct 3 Arena numbers, I think we can be pretty sure that good old Jim would then move the goal posts and tell us that nothing short of a packed out 83,000 guests at Irelands Future Rally at Croke Park, would move him to reconsider his view of where the future is bringing us to.

Then there was Ruth Dudley Edwards, a cohabitant of the same echo chamber as her pal Jim, who complained the event in Dublin had no credibility and wasn’t inclusive because there were no unionists in attendance, and because Ireland’s Future Chairperson Frances Black once sang at Martin McGuiness’s funeral. As a Unionist herself, Ruth failed to explain why she didn’t attend the event, if only to call out the wicked ways of the organisers, or to explain why all the other political unionists refused invitations to attend.  Ruth also neglected to mention those other ordinary young non-political and civic unionists who did attend the event and spoke and wanted to learn and have a say in their futures. What Ruth, Jim and the other bitter, old and nervous political unionists seem to not be able to grasp, is that it’s impossible to have a conversation about the future without discussing a united Ireland – and that’s the same whether you are a unionist or nationalist or other.   After all, it is likely the most discussed topic amongst ordinary protestants and unionists of late.  Does anyone really believe that unionists weren’t following on social media and other news outlets in the hours after the 3-Arena event last Saturday, just like nationalists, to see how successful it had been?  So is there any good reason why all these people shouldn’t or couldn’t discuss their futures together?  Well yes certainly if Jim or Ruth has any say on the matter.

Can Jim Fix It?

I would now like to refer to Jude’s blog last week where he highlighted a list of proposals by Jim O’Callaghan TD of Fianna Fail who was set to present them to the floor of those attending the Ireland’s Future gathering at the 3 Arena last Saturday. While Jude correctly cast a critical eye over some of the proposals which were made public in advance of the Saturday event, he also rightly praised the ones he thought were worthy of consideration.  The proposals of course would come into play or at least consideration, in the event of a future united Ireland.

The one proposal of Jim O’Callaghan’s that grabbed my attention, and Jude’s, was number 3. “The people of Northern Ireland would not become politically submerged under the control of the new state”.   Jude felt this proposal was code for leaving Stormont in place as a regional assembly so unionists could continue to govern themselves or obstruct government as they have been doing of late, or at least feel they are governing themselves as much as they had, like in the past (sectarism included).

Jude objected to this 3rd principle of Jim O’Callaghan’s because rightly or wrongly he sees it as a recipe for disaster as it will allow unionists to continue to not engage with their neighbours and allow them to not have to embrace equality. This solution of Jim’s will only see continued unionist bigotry as getting occasional yellow cards from the referee instead of straight reds.   While I agree with Jude to some extent on this, I would have a rather different reason for opposing Jim O’Callaghan’s principle number 3.

My problem with this has its roots not in Stormont but in Leinster House. I’m one of those republicans who has always felt that the legacy of partition has equally, albeit to a lesser degree, caused a ‘them and us’ siege mentality in the southern state.  After ruling the roost for a hundred years between them, Fianna Fail and Fine Gael and others have never wanted any Nordies about their Leinster House, be they nationalist, republican or unionist.   One need only look how both those southern conservative parties continue to resist and actively campaign for Irish unity, or to set up a citizen’s assembly to even plan for unity.   See how both parties have also consistently resisted calls for voting rights to be granted for Irish citizens living in the north in presidential elections.  The Seanad in Dublin was originally established to allow unionists a voice here, but are there any unionists in the Seanad apart from the occasional token tame unionist?  Today, Fianna Fail and Fine Gael (with the exception of Neale Richmond) speakers have belatedly decided to attend Ireland Future events because the writing is clearly on the wall. What Fianna Fail and Fine Gael have clearly shown us down through the decades is that you don’t have to be a unionist to be a partitionist, and what Jim O’Callaghan’s principle number 3 will ultimately mean is partition of a sort will remain on the island. If we are really talking about change for the future, then the old establishment partitionist mindsets in Dublin will also have to change – don’t ask a unionist or nationalist to do what you are not prepared to do yourself, Jim. This is not going to be a free ride for the south, and if Jim and his party and followers insist that Stormont must remain, then I would argue that each of the other Irish provinces are given regional assemblies to government themselves too.  But of course, that’s another argument/debate!

View all posts by Jude Collins →
Watch Out for That Bus – by Michael Lagan
PAT+JUDE TALK ABOUT KATE IN BELFAST, VACCINATION FATIGUE, & SHOULD GRASSROOTS LEAD THE UI MOVEMENT?

One Response to Is The Union Safer Since Last Saturday? – by Kevin McCarthy