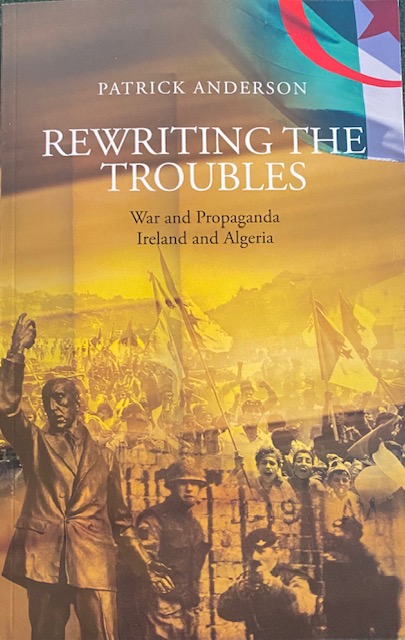 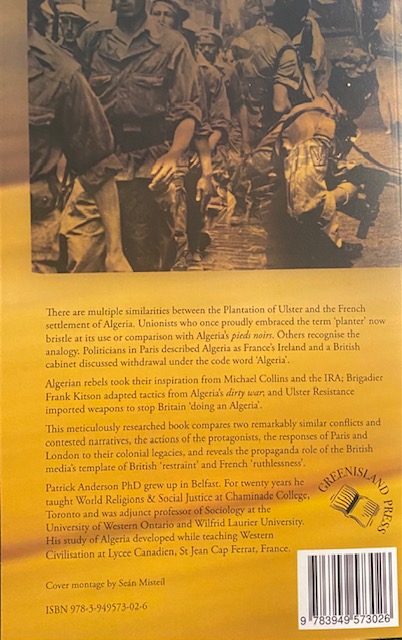 The so-called ‘Troubles’ have been replaced by a new controversy with unionists and journalists railing against ‘rewriting’ history. For Unionists the conflict was about a ‘democracy beset by irrationalism terrorism.’ For Irish republicans it was a war of resistance to British repression. This book uses Noam Chomsky’s propaganda model to evaluate the media coverage of the ‘Troubles’ with its historic match, the Algerian War of 1954-62. The analogy with Algeria is, for many, too close for comfort. Unionists bristle at any comparison with French Algerians, the pieds-noirs. They are outraged at any colonial explanation as this would put the focus on the legacy of Stormont. But unionists previously regarded their planter or settler origins with pride. This new outrage resembles Israelis branding any criticism as anti-Semitic. It is an attempt to shut down any colonial analysis. They prefer a religious explanation of a sectarian republican campaign.

The two conflicts generated remarkably similar media dramas. The French and British armies pursued massive security operations resulting in torture and notorious civilian massacres (Bloody Sunday and rue d’Isly). The French were condemned for killing civilians during the rue d’Isly slaughter while even the ‘liberal’ British press maintained Widgery’s propaganda version of a Bloody Sunday IRA gun-battle for many years. During the UWC Strike/Rebellion and Algeria’s corresponding settler rebellion of ‘Barricades Week’ the British media urged the watering down of power-sharing to placate loyalists while demanding the French army should root out the ‘fascist settlers’ of Algiers. The ‘liberal’ British press condemned the French army for colluding with French Algerian ‘counter-terrorists’, the OAS. British collusion with loyalist death squads is still denied despite the mounting evidence. The ALN’s ‘Battle of Algiers’ and the IRA bombing campaign are evaluated. Algerian rebels who bombed civilians as policy were explained as the inevitable response to French repression. Algeria’s insurgents, the ALN, were portrayed as idealists and patriots, the IRA as deluded terrorists.

Conor Cruise O’Brien, a fanatical supporter (his words) of the Algerian rebels proclaimed the ALN should take no lessons from the West on the appropriate methods of resistance. But torture by French paratroopers was inexcusable and brought shame on France. French torture was never justified even in the case of the ‘ticking bomb’ scenario. British torture, on the other hand, was denied or justified as a necessary to stop ‘evil men’ even as the British army did not confront a no-warning bombing campaign from republicans. The press missed that British or French army torture was meant to generally intimidate the Irish or Algerian nationalist population.

Brigadier Kitson admits he copied the methods from Colonel Roger Trinquier paratroopers in Algiers. Lord Widgery was another student of the Algerian war. In his attempts to justify torture Widgery copied the justification, almost verbatim, of Pere Delarue, chaplain to the torturing paratroopers in Algiers. Contrary to unionist denials there are many other similarities. Politicians in Paris described Algeria as France’s Ireland and the British cabinet discussed withdrawal under the code word ‘Algeria’. Algerian rebels took their inspiration from Michael Collins and the IRA. Ulster Resistance imported guns to prevent Britain ‘doing an Algeria’.

The official British version of the Northern conflict was framed by Conor Cruise O’Brien. But this book exposes O’Brien as a propagandist. He supported the ALN’s policy of attacking French civilians.  O’Brien framed Algeria as a classic anti-colonial war despite the obvious religion dimension. He reversed this for the North, framing the conflict as a religious squabble and denying the colonial legacy. While unionists complain of rewriting the Troubles republicans have been excavating their narrative from under the previously dominant British/O’Brien version. It is hardly surprising then that unionists now complain that blame is shifting on to British forces. This study demonstrates the remarkable similarity between the Northern conflict and the Algerian War. It exposes the British media’s double standards. While condemning French brutality in Algeria it was little more than a propaganda organ when covering Britain’s dirty war on its own doorstep.

View all posts by Jude Collins →
PAT+JUDE TALK ABOUT WESTMINSTER & SCOTLAND, THE NATIVE. PEOPLE OF N AMERICA, AND HOLIDAY HOMES
DROIT DE SEIGNEUR – LONG MAY IT REIGN??? – by Donal Kennedy

2 Responses to Rewriting the Troubles: War and Propaganda in Ireland and Algeria – by Patrick Anderson