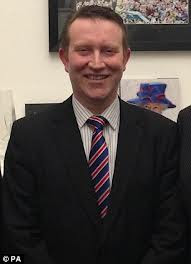 I’ve just watched a News Letter  online interview   with the elusive Nigel Lutton, who is the agreed unionist candidate for Mid-Ulster. Nigel was most conspicuous by his absence (as was his chief opponent, Sinn Féin’s Francie Molloy) on the BBC’s The View earlier this week.
I’ve written already about the fact that Nigel was selected after Sinn Féin had nominated Francie Molloy as their candidate. The prominence that was given to the fact that Nigel’s father Eric, an ex-RUC man, was shot dead by the IRA in 1979, and to the fact that Nigel’s cousin David Simpson (DUP) had used parliamentary privilege to name Francie Molloy as implicated in that killing, made it clear that Nigel’s candidature would be used as a spear to stick into Sinn Féin. There is little hope that Nigel will win the seat – it’s got a whopping Sinn Féin majority – but  the DUP hope it will do two things: (i) wound Sinn Féin via Molloy, by highlighting Nigel as a victim of republican violence; (ii) make it easier to gobble up what’s left of the UUP.
But while the world and his mother knows of David Simpson’s charge against the Sinn Féin candidate, there’s been rather less talk about Uncle Joey. Joey Lutton was a member of the UDR and was convicted of involvement in a number of atrocities as part of what was known as the Glenanne Gang. His crimes included a gun attack on Clancy’s Bar, which killed three people, and another on the Eagle Bar, which killed one person.
Clearly Nigel isn’t responsible for what Uncle Joey got up to, but it’s interesting to note the prominence given to cousin David’s House of Commons claim against Molloy (no evidence) with the deathly silence on Uncle Joey’s actions (lots of evidence).
Nigel says in the online interview that “It [the matter of victims] has came [sic] forward so often in this campaign” and that “every victim is the same” and that he isn’t ready to shake Francie Molloy’s  hand at the electoral count on Thursday because “there’s been no apology [for killings] from republicans”.  Mmm. But Nigel,  if “every victim is the same”, wouldn’t the loved ones of those killed by Uncle Joey and the Glenanne Gang be equally entitled to apology?
Nigel wrapped up his News Letter  interview by saying “I am an ordinary person” and it’s true: in his ill-at-ease interview he looked very ordinary. But he’s not. He’s been selected as someone who will highlight the suffering of victims of the Troubles. One provision:  they must be victims of the IRA campaign. Victims of Uncle Joey and the UVF/UDA need not apply.

12 Responses to Nigel Lutton, his father and his Uncle Joey