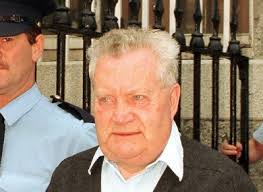 Last night I did a brief interview with Paul Clarke on UTV and  came away (as I often do from broadcasts) feeling deeply dissatisfied with my contribution. And as so often happens, it wasn’t what I said that left me banging my head on the steering wheel, it was what I hadn’t said.

The topic was the latest revelations about the hundreds of children whom Brendan Smyth  abused before he was ordained a priest and throughout his life as a priest. His is a notorious case and one that has done cruel and irreparable damage to the lives of so many. But the focus on Smyth and the damage he and other priests have done to the Catholic Church and the children they violated  raises, I think,  more general questions, some of which I  think I have the answer to and some of which I don’t.

Before starting let me take the precaution of  repeating myself in case anybody is hard of hearing: CHILD SEXUAL ABUSE IS A UNIQUELY HORRIBLE CRIME THAT PREYS ON AND WOUNDS INNOCENT CHILDREN. IT. IS. VILE.

1. Are Catholic priests more likely to be child sexual abusers than  clergy in other churches?

The answer  is no. The Catholic Church is  the only Church which has released data on the subject, but surveys and studies in the US at least indicate that this cruelty is not confined to Catholic clergy. The president of the US’s National Centre for Missing and Exploited Children: “I can tell you without hesitation that we have seen cases in many religious settings, fro traveling evangelists to mainstream ministers to rabbis and others”.

2. Are Catholic priests more likely to be child sexual abusers than men in the general population?

The answer is no. Both groups report as being in the 4%-5% range.

3. Is the Catholic Church the institution where children are most likely to be sexually abused?

The answer is no. As the past few years have seen, child sexual abuse occurs in many institutions and places: in Rotherham, in Westminster, in the BBC,  in Kincora – the list goes on.

3. Has the Catholic Church covered up sexual crimes by its clergy?

The answer is yes. To its shame. And as a result, people like Brendan Smyth have been able to abuse and abuse again and again.

4. Is the Catholic Church unique in this kind of cover-up?

The answer is no. All big institutions, in matters grievous and less grievous, cover up when under threat from outside. You think there weren’t people in the BBC who knew that Jimmy Savile or Rolf Harris or Dave Lee Travis were abusers and said nothing? You think there weren’t people in Westminster who knew the massive abuse happening there and said nothing? Or in Kincora? They all knew. But they kept quiet or covered up. It’s what institutions do. To their shame.

5. Where is a child most likely to suffer sexual abuse?

In the home. In somewhere between 68% and 75% of cases, the child has been sexually abused by a near relative – a brother, a father, an uncle.

6. Is it true that child abusers can’t help themselves and inevitably re-offend?

The answer is I don’t know. The general perception among the public appears to be that they will inevitably re-offend. The complication with this, if it is true, is that paedophilia begins to sound like a disease, over which the paedophile has no control, rather than a voluntary action for which he deserves punishment. In other words, if he is a victim of his own obsession, he belongs in a hospital rather than a prison. You can’t attach blame to people for something they cannot control. On the other hand if they can control  their urges, why do we assume all paedophiles will reoffend?

7. Is paedophilia the only sin of which the Catholic Church is guilty?

The answer is no. Although you’d be forgiven for thinking it was, judging by media coverage. It’s as if the present-day media are guilty of the narrowness of vision which the Catholic Church had when I was young: sexual offences are deemed the only ones worth mentioning, the only really bad thing.

View all posts by Jude Collins →
WHEN YOU’RE UP A GUMTREE by Harry McAvinchey
That McGuinness – what a nerve, eh?