Just a quick update on the previous rant.

The Orpheus building (aka the former Co-op building) on York st (along with its Art Deco neighbour)is now gone.

This building is no more.

It has ceased to be.

It’s expired and gone to meet its maker.

This is a late building.

Bereft of life, it rests in peace (pieces).

It’s rung down the curtain and joined the choir invisible.

Furthermore, cursory rants to taxi drivers, pub dwellers and other citizenry has made me aware of a general misconception held by the public that can be summarised as “ach sure, they’ll not be allowed to knock them buildings down” (regarding the remaining buildings in the area).

And furthermore they WILL.

Very few (if ANY) of the buildings in the North st, Kent St, Union st (aka The Belfast Telegraph) area are protected. (The Art Deco Bank of Ireland building was listed but the recent plans to refurbish it never materialised).

Here is a picture (available at the planning office in Linenhall st) of the plans for part of that area: 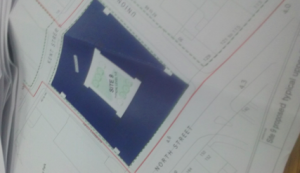 You see that blue city block (Site 9) within the red line?

That area includes the Sunflower bar, the odd derelict warehouse and some funky but derelict buildings.

The plan is to kowp the whole lot and build flats.

So, in case you thought the authorities were acting in the interests of our cityscape and architectural heritage THEY ARE NOT.

As you read this the old redbrick warehouses on Stephen st are being chipped away.

Yup. Red brick warehouses. In every other city in the developed world developers go nuts to get their hands on these prizes to convert them into flats (think of the apartments in ‘Friends’).

Stephen St, Belfast (What’s left of it) A Warehouse Conversion 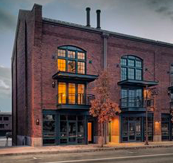 But not in Belfast. No. Much easier to knock them down and build more profitable apartment blocks.

Now, here is a pic of buildings in Kent st. I warn you, they look unimpressive and you’ll think “erm, maybe the wrecking ball is the best way forward AG? They’re crap!”

And to be fair, in their current state they ARE.

Now, here is a pic of a former stomping ground of mine, Hardware lane, Melbourne City Centre: 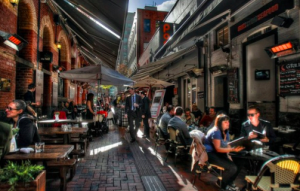 Architecturally speaking it’s very similar to Kent St; Old warehouses on one side and unimpressive modern buildings on the other, its width is also similar.

It’s an excellent example of what could be done with a bit of imagination.

Granted, it’s in the middle of Melbourne, a massive wealthy city and is a thoroughfare between main streets. If only Kent st were a thoroughfare…

Oh wait, they’re hoping to build thousands of student flats in the area, with the University as the main focus! Problem solved?

Smithfield and Union evidently has its fans at present: http://www.smithfieldandunion.com/home.html

Can we not just step back for a moment and consider the following:

3/ The Ulster University needs accommodation in the city centre

4/ We have an area due east & north east of this area that is ugly, peppered with car parks, awful architecture, offices and has excellent links to the city centre 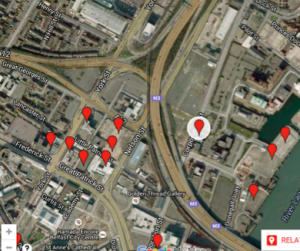 Why not RE-build and refurbish Smithfield & Union (and save our heritage) and ‘develop’ this area?

That way we get jobs AND heritage AND student accommodation AND long term employment prospects.

Now, this is just MY idea, one that could be tinkered with and adjusted with upon the receipt of facts and learning from people in the know, BUT just hear me out.

Why not turn Smithfield and union into a conservation area (of sorts or something similar), prohibit the wholesale demolition of any pre-war building in the area (façade retention to be considered) and limit the height of buildings to be no higher than the highest existing building there at present.

The larger buildings could still be converted into flats .

The pre-war buildings would now be preserved either as stand-alone units or incorporated into a bigger building but with the facades retained.

Pedestrianise Union st & Kent st (as has been done in many cities around the world with their pre-war industrial architectural areas) to give the area a more livable feel.

Now, to go a tad further and incorporate the suggestions of some of the readers of Dr C’s blog we could have the following:

1/ Green spaces in Smithfield and Union area – Instead of building over every single car park in the area why not convert some (all?) into gardens, play parks and or vegetable patches? This idea was inspired by ‘Paul’; – “Probably better leveling them and turn the areas into parks with fountains, gazebo’s, abstract structures, benches etc. It would make the place look a lot better and the greenery would certainly increase my sense of well-being”

2/ Eye grabbing architecture – A difficult one to impose as Frank Gehry, Norman Foster and Zaha Hadid don’t come cheap. I believe this is what was meant by Terry Corr’s comments in the previous blog:

BUT, for sake of argument, let’s say we have people of that calibre on our side.

Let us incorporate all the above ideas in which case;

1/ Smithfield & Union retains its architectural heritage and is partly pedestrianised and has the addition of some new apartment blocks (suitably designed) as well as X amount of new green spaces.

2/ With the imposition of limits developers have to look elsewhere for places to demolish. The area east of the Cathedral leading up to Corporation square has very little to offer. It’s kind of cut off from the city centre, is a mish mash of turn-offs and unimpressive car parks.

So, why not designate this as an area of redevelopment? Erect schmick, nice, new, shiny buildings worthy of architectural note and have them all arced towards the Ulster University (the main player in the regeneration plan) with pedestrian & bicycle accesses by means or corridors, bridges and paths?

In short we’d have saved the fabric of one historic area, given a new lease of life to another (and no doubt injected a bit of economic life into the Corporation st area), have outstanding architecture in a currently scarred-looking area and have all the student flats we need and in general made two areas a bit more ‘livable’.

As far as plans go, who here loses (apart from developers)?

It’s just an off-the-top-of-my-head plan and very idealistic but it incorporates ideas of readers here and saves the Smithfield and Union area as well as giving the Ulster University what they need.

It also gives Belfast two new areas to show off.

Is anybody interested in cajoling the powers-that-be? Then email the planning office with your thoughts.

As always, here’s a reminder of what you can do to help:

“If you follow this link you can go directly to the application: http://epicpublic.planningni.gov.uk/publicaccess/applicationDetails.do?activeTab=summary&keyVal=NR2M3ISV30000

Simply register and then add a comment (tick the ‘object’ button too).

The ref for Northside is: LA04/2015/0577/O , please quote this if you email the planning office; planning@belfastcity.gov.uk

Lastly, if you’re interested in being kept in the loop (come January) then email these chaps: belfastrevival@gmail.com