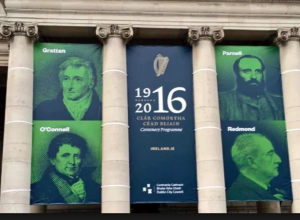 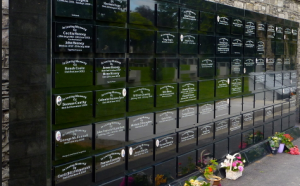 That Wall – it’s impressive, you have to admit. Glossy black/grey marble, names in gold or gilt or whatever. Making no distinction between those who died in 1916, no hierarchy of …I almost said victims there. No hierarchy of those who died during the violence of Easter week a hundred years ago.

I applaud that. What it appears to be saying is that all lives lost through violence are wasted lives, robbing their owners of the years of mortal existence which we wake up to every morning. No matter what side they were on, they were snatched out of our world before their time. That’s commendable. Its clear core message is: don’t kill people.

Which makes me a little puzzled about the demonstration of armed  strength that paraded through Dublin a week or so ago. No sniggering at the back – the Irish armed forces are clearly nothing compared to those of Britain – we don’t even have a nuclear weapon, for goodness sake. But it was clear that what we have was disciplined, well-armed, alert.

And that, as I say, makes me a little puzzled. The Glasnevin wall was constructed by the Glasnevin Trust (founded in the nineteenth century by Daniel O’Connell) but it clearly had the full support of the acting Taoiseach and Minister Heather Humphreys, who attended the unveiling. What ‘s confusing is that the Wall represents a silent condemnation of all violence, from whatever side; while the Irish armed forces, paid for from the public purse, represents an endorsement of violence or its threat as a method of getting your way politically.

“Outrageous!” I hear the cry. “The Irish army has played a valuable role in UN peace-keeping missions!” It has indeed. But it hasn’t gone on those missions equipped with pea-shooters. When we say that the Irish army is part of a peace-keeping mission, we mean the Irish army is part of a well-armed international group that tries to get people and countries to act in ways that they believe best. And the method they use to encourage such compliance is violence or the threat of violence. If it isn’t, what’s with the weapons?

When you take that in, and take in the banner which hung over the entrance to the Bank of Ireland, with images of Grattan, O’Connell, Parnell and Redmond, all clustered round the 1916-2016 motif, you begin to see what the Glasnevin Wall is really about. Like the Bank of Ireland banner it’s about erasing the notion that some people were on the right side of history and some were on the wrong side. That those who fought to maintain British rule in Ireland were as deserving of commemoration and honour as those who fought to end it. And those who never engaged in violence at all, who didn’t come within an ass’s roar of the GPO, are the true heroes of Irish history, and if that means bending the centenary commemoration to include people who had nothing to do with it, that’s just fine.

The Irish establishment has worked tirelessly for months and maybe years to pretend that they honour the men who gave their lives for Irish independence in 1916, while at the same time working feverishly to say, in so many words, “Ah lads, wasn’t the whole thing a terrible unhappy and violent mess? Wouldn’t we be far better sticking with the political path?”

Footnote. The above reference to “lads” does of course include lassies. It does not, repeat not including northerners and particularly republican northerners.  It’s time they stopped moping and accepted the fact that they’re not really part of Ireland.

19 Responses to Another brick in the Wall