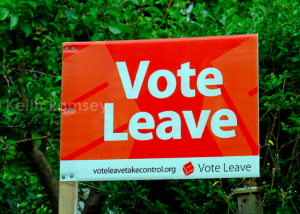 It feels like January 1933. That’s when Hitler was appointed German Chancellor and the road to his becoming a dictator was officially opened. I know that we can pluck a number of positives from last night’s referendumt rubble, but right now I feel as if I’ve been kicked in the stomach by a horse.

Stop and think about it. Do you love David Cameron? Probably no. Do you love George Osborne? Probably not. But compared to Boris Johnson and Nigel Farage, they begin to look pretty attractive. Johnson reeks of bullish privilege;  Farage resembles a three-card trick man, such as used to operate near the seaside in Bundoran years ago. Is Johnson concerned about people who didn’t go to Eton and Oxford, who have to struggle to put bread on the table and keep a roof over their heads? Is the NHS safe with a man like Farage around, who has an ambition to end it and replace it with private insurance? I think you know the answer to those questions.

What does the rest of the world think of the British decision to quit the EU? Well, we know the EU is damaged by Britain’s withdrawal; as Farage pointed out last night even before he realized he’d won, other countries in the EU are now thinking of holding an in-out referendum. The US isn’t keen on Britain’s referendum result, if we’re to believe Barack Obama. And of course the unspeakable Trump is probably hugging himself this morning: another (pretend) blow for the people against the Establishment, showing it can be done. Meanwhile the pound has slumped, the markets are suffering, and I shouldn’t be surprised if a number of BREXITERs aren’t already asking themselves “What in God’s name  have we done?”

OK, let’s try to find some positives. That the UK will withdraw from the EU is now a fait accompli – as Cameron said during the campaign, there’s no going back. But will there be a UK to remain outside the EU? Scotland and the north of Ireland voted decisively to stay in Europe. Already the Scottish National Party has made noises about holding a second independence referendum. If they do, it’s hard to see them not overturning the last referendum decision to remain in the UK. Like Ireland, Scotland likes the EU. All it will take is some 6% of Scottish voters to switch sides from last time, and Scotland will vote for independence and stay in Europe.

And here? Martin McGuinness has already annoyed Mike Nesbitt by calling for a border referendum. McGuinness’s call makes perfect sense, since the majority of people here voted like Scotland to remain in the EU; besides which, win or lose, it’s past time we addressed the constitutional question. So while the UK may see itself as having asserted its independent will, in doing so it has exposed fault lines throughout the UK that may ultimately lead to its destruction.

However, the possible positives are far outnumbered by the definite negatives of last night’s vote. I haven’t even mentioned the impact of a hardened border on trade,  business  and security throughout Ireland. If you think Nigel Farage  is gloating over his unlikely victory, another group must be dancing on the ceiling. I’m referring to the violent dissident republicans. They can hardly believe their luck. They’ll cite a hardened border as proof positive of the failure of Sinn Féin’s strategy. Those of us old enough to remember attacks on border customs posts won’t have long to wait before a replay of the events of our youth.

At this point I think we should  quietly and reverently kneel and recite a decade of the rosary. The Sorrowful Mysteries, of course.