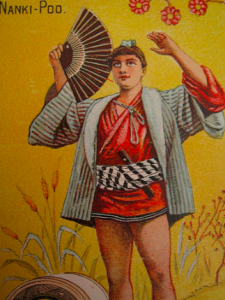 I love Gilbert and Sullivan. Their tunes are terrific but it’s the absurdity of their plots that gets me every time. I’m listening at the moment  to The Pirates of Penzance, where the hero, although he’s twenty-one, won’t have his twenty-first birthday until he’s in his dotage, because he was born on 29 February.

The southern government appear to have wandered into a G and S operetta. The European ruling is that Apple must pay the southern government €13 billion in taxes, since over the years they’ve been paying the equivalent of €50 for every million earned. Apple, understandably, are very vexed and indignant, and reject the ruling. The G and S bit comes when Enda Kenny’s government says “We agree”. They’re like a lottery winner who is going to fight tooth and nail to avoid having all that money foisted on him. And it’s not as if the south couldn’t do with a windfall. The health system, the education system – all sorts of areas are in dire need of funding.

The south’s Finance minister, Michael Noonan was on the radio yesterday accusing his political opponents of rushing onto social media with their  well-shaped soundbites. Then, like Tony Blair with his hand of history, Michael declared that to take the €13 billion would be “like eating the seed potatoes”. Michael may like a soundbite as much as the next man, but Apple CEO Tim Cook is safe from the possibility that Michael will test his gnashers on Apple.

The reason behind Noonan’s G and S response is that he’s fearful Apple and other big companies like Facebook and Google will take their business and their jobs elsewhere, if the south starts taking back a proper tax revenue from them. The fact is, the south will offer companies absurdly low tax arrangements, so that they’ll come, they’ll stay, and they’ll provide jobs in Ireland.

What to do? The European competition commissioner, Margrethe Vestager said yesterday that what was needed was international arrangements so that big international companies weren’t able to hold countries to ransom, and play one off against the other, by dangling the prospect of jobs in exchange for laughable tax arrangements.

Ms Vestager is absolutely right. At the moment, Apple and companies like them can bully countries into doing their will because if they don’t, Apple will take its business elsewhere. In terms of jobs, the south of Ireland has done well out of the multinationals. In terms of justice, they have colluded in allowing those companies to have a degree of power that makes the Dail look like a Skibbereen production of The Mikado, with Michael Noonan cast as Nanki-Poo and Tim Cook as the Lord High Executioner.

View all posts by Jude Collins →
THE SPUDS YOU LIKE
‘Good religion, Bad religion’ by Joe McVeigh

17 Responses to Michael Noonan: are you Nanki-Poo in disguise?