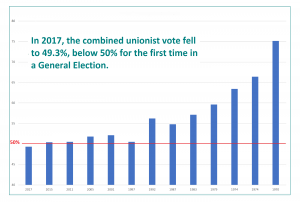 So unionism is now a minority concern? In the election to the Assembly earlier this year unionism lost its claim to the majority of seats for the first time. Given that the Ireland was deliberately carved up to give unionism a permanent and self-perpetuating majority, this was certain a notable benchmark. Obviously, unionism had tried to enhance that through deliberately gerrymandering electoral boundaries to minimise the political representation of its opponents. Coincidentally, for elections at Westminster, proposed changes to the electoral boundaries will reduce the number of MP elected from the north to adjust for the over-representation of seats in unionist-voting districts in Antrim and Down (where the number of voters per constituency is too far below the average).

As Westminster MPs are elected on the first-past-the-post system, the headline figures are always skewed towards the larger parties and often obscure the overall voting patterns. The DUP will obviously champion its haul of ten seats out of eighteen. And while the story of the 2017 election to the British parliament in Westminster continues to unfold, it appears to have already entered a deal with the Tories to prop up another Tory government. The implications of this are far-reaching. Tory partisanship had already exposed its inability to act as some form of honest broker in talks to revive the Executive for the Assembly up at Stormont. A formal arrangement to govern with the DUP now makes even the pretence of the Tory’s chairing talks laughable. Given that the DUP represent a minority view of Brexit, again, the implications for Ireland of a combined Tory and DUP negotiating position should be setting off alarms bells in Dublin.

On the other hand, the DUP are very much a foreign country to much of the British media and public. A very public unmasking of the DUP, its history, views and prejudices will be the immediate cost of its support for a Tory government. And it won’t be pretty. Opponents of the Tory party will not shy from holding them to account over entering a coalition with the DUP. Indeed, the DUP could well become the anvil on which Conservative party values and actions are hammered by Labour and the press.

Behind all this, though, another milestone (of sorts) for unionism has almost passed unnoticed. In the 1970 Westminster election, unionism took 75.1% of the vote in the north. This dropped in subsequent Westminster elections, to 64-66% in the 1970s, dipping to 59.6% in 1979. Since then it has slowly but surely declined although it appeared to have stabilised at above 50.5%. In the 2017 election, now, for the first time, it has dropped below 50%, with the combined unionist vote only amounting to 49.3% of the total vote cast. This was against a backdrop of unionists pushing for (and getting) higher turnouts in safe seats to maintain their overall vote. The onus is now on nationalism to close the gap between that 49.3% and it’s own 41.1%.

What may be just as significant, is the extent of DUP dominance and the loss of plurality of voices within unionism which only tolerates a narrowly defined platform of Protestant fundamentalism, the loyal Orders, flag-waving monarchism, a physical-force security policy and a self-defined insular Britishness (that largely seem entirely alien, and peculiarly Irish, to people from Britain). Arguably, there may be warnings in there for the future of nationalism, too (although that, maybe erroneously, assumes that similar dynamics apply).

The immediate future, though, is going to be interesting. How will high definition scrutiny of the DUP play out, both in Britain and here? I think in the short term, we can pretty much rule out any meaningful progress on forming an Executive in talks chaired by the Tories under the eye of their DUP allies. In the likely scenario of an election in the south in 2017, what are the chances now of Sinn Féin entering a government? With an immobilised Assembly and Executive in the north, if Sinn Féin get into government in Dublin while the DUP are in government in London, will we effectively have the north ruled under joint authority, of sorts, by the end of this year? Probably not what the DUP expects to happen when it started to act out its political fantasies this morning but time will tell.