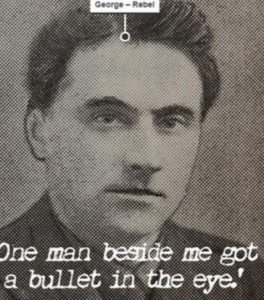 Kevin O’Shiel, the Tyrone Nationalist, who was a key player in the foundation of the Irish Free State, the friend of Mick Collins, election agent to Arthur Griffith and the first judge in the Dáil courts, described George Irvine, “that extremely rare thing. A Northern Protestant, Separatist Republican, who had fought through Easter Week Rising in 1916, arrested, interned and liberated.”

George Irvine was without a doubt, an unlikely Irish rebel. His roots and background clearly illustrate this man was not destined to become an Irish republican revolutionary. The Grand nephew of Colonel William Irvine, Commander of a Regiment of Irish Volunteers in 1782, from parents who owned and ran a bible bookshop, educated at Portora Royal School (ex pupils included Oscar Wilde and Samuel Becket), he was one amongst a scattering of Northern Protestants who became involved in the events of Easter week, 1916. George, a member of the Church of Ireland from Enniskillen in County Fermanagh, was to train and become a school teacher. At the turn of the 20th Century, George moved from Enniskillen to Dublin to take  up a teaching post at a Church of Ireland School in Rathmines. It was in Dublin where Georges radicalism would broaden.

Inspired by the cultural revolution that swept across Ireland in the late 19th century, aimed at reviving the Irish national consciousness, George joined the Gaelic League in 1905. He began to learn the Irish language and became a passionate advocate of the written and spoke tongue. His formidable teacher, Sinead Flanagan, taught Irish language at the Leinster College of the Gaelic League in Parnell Square in her spare time. She was to later marry one of her Irish students, maths teacher, Eamon de Valera, the Commandant of Boland’s Mill during the Easter Rising and future Taoiseach and President of Ireland.

Two years after joining the Gaelic League and subsequently being radicalised in his views, George was approached by Seamus Deakin, a leading figure in  the Irish Republican Brotherhood (IRB), and he accepted an offer to join the organisation. He took the oath, “I do solemnly swear that I will do my utmost to establish the independence of Ireland.” He was attached to the Teeling Circle (IRB organised into circles, a circle was analogous to a regiment) coming into contact with influential figures such as Eamonn Ceannt and Bulmer Hobson, the Northern Quaker, who was one of they key revivalists of the IRB. George rose to become  the Centre (colonel) of the Clarence Mangan Circle and later was a member of the Leinster Council of the IRB. Up until the Rising of 1916, George served as the Secretary of the Dublin Centres’ Board.

With the establishment of the Irish Volunteers in November 1913, “to back up Home Rule”, George became attached to B/Coy 4th Battalion which drilled at Kimmage. Soon, George became Office Commanding (OC) of the company. After the Volunteers split in the wake of John Redmond’s Woodenbridge speech,  George’s company was decimated, leaving him with only 50 men.

George was not involved in the planning of the Rising. Early in 1915 his first indication that preparations were in place was an an address to the Dublin Centres by Sean MacDermott who said, “there would be a rising with or without German aid.” As plans for the Rising were heating up in early 1916, each day, George left school on his bicycle “carrying messages and summoning meetings of the Centres’ Board.” Secret Police files from the time report George visiting Tom Clarke’s shop in Parnell Street. On Holy Thursday, George received “definite news” that a Rising was taking place at a meeting of the Dublin Centres. “The news came as a bombshell to all present.” On the evening of Good Friday, 21st April 1916, George was summoned to a meeting with Commandant of the 4th Battalion of the Volunteers, Eamonn Ceannt. “He discussed some formal battalion business and read the words of a song he had composed, Ireland Over All, and let us go.” As an officer in the Irish Volunteers, George awaited his orders.

On Easter Monday, 24th April 1916, an order came from Eamonn Ceannt for George to turn out at Kimmage at 10am. Only 12 men turned up at Kimmage, due to the confusion perpetrated by Eoin MacNeill’s countermand order. Around 12pm, 38 year old,  Captain George Irvine marched alongside the 4th Battalion as they aimed to seize the South Dublin Union. The South Dublin Union was occupied at about midday by Eamonn Ceannt and the 4th  Battalion Volunteers. Throughout the week, the South Dublin Union sustained a number of heavy attacks from the vastly superior British military. George and his men were involved in  a ferocious battle with the Lewis gunners as they tried to hold the Rialto Gate, where 17 year old Volunteer John Traynor was killed, he “got a bullet through the eye.” George and his men were surrounded  by “a menacing ring of fixed bayonets.” Seeing they could no longer hold out, George asked his men if he should surrender and he did so. Refusing to accept the commands of the British junior officer, a firing squad was assembled before a senior officer appeared shouting, “take these men to Kilmainham Gaol.” As the men were marched up South Circular Road, under heavy escort, “people on sidewalks booed and shouted at the soldiers to shoot us.”

George Irvine was one of the twelve prisoners from the South Dublin Union who was court martialed in the wake of the Rising. He was subsequently sentenced to death for his part in the Rising, later commuted to ten years penal servitude. George was to serve time in Lewes Prison before being release in the general amnesty of 1917. In correspondence in Lewes, he referred to those of 1916 as “simply marvellous.”

After his release and the profound changes that had swept Irish society, George became involved as an activist in the rejuvenated Sinn Fein movement, whom were to have massive electoral success in the 1918 General election. George was against the Anglo-Irish Treaty and was to subsequently fight on the Republican side during the Irish Civil War. When the Civil War ended, he returned to teaching in Dublin. He died on 30th June 1954. At his funeral, a firing party gave full military honours and the last post was played. George Irvine,really, was an “extremely rare thing.”

View all posts by Jude Collins →
Sinn Féin, RTÉ and TV3
“Gerry Adams is not a mathematical genius” – the Indo