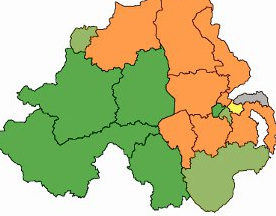 Odd, isn’t it, how little attention we pay to the creation of constituencies. In the good old bad old days, nationalists and republicans knew that wards and boundaries were mapped out so that the result would be a unionist majority wherever possible – and even where seemingly impossible, as was the case in Derry, where one-third of the population miraculously elected two-thirds of the Corporation.

Nowadays that’s gone, but we’re presently in the throes of having boundaries for Westminster elections redrawn – and these will apply to Assembly elections also. The result will be that we’ll be electing 17 MPs, not the present 18, and the Assembly will reduce by 12 MLAs, from 108 to 96.

Constituency boundaries have to be redrawn, we’re told, so that different constituencies are roughly equal – within 5% of each other. That’s a worthwhile goal and a tricky one to achieve.

I’m going to pass on which political party will gain most from these changes, but here are two questions I’d quite like answered:

(i)   Are you happy with the composition of the Boundary Commission membership?

(ii)  Are you happy with the criteria they apply when creating a constituency?

Under (i), I suspect you like me would have to do some thinking before you’d be able to say who are members of the Commission and how they got the job. Since it creates the foundation on which any democratic election system rests, you’d think maybe the Commission itself would be democratically constituted. Alas, you  would be wrong if you did.

The chairman of the Commission is the Speaker of the House of Commons. The deputy chair is a High Court judge appointed by the Lord Chief Justice. The other two Commissioners are appointed by the British Secretary of State for Northern Ireland. Presumably all these people are very good at counting. They are not, however,  representatives of the people. As Ricky Tomlinson might have said: democracy my arse.

And what about the creation of the constituencies? Well, the idea of having each equally weighted , within 5% of difference, is pretty good. Not easy to achieve. But hold….What are the criteria that are being used to decide how big each constituency is?

There’s a dark little side of me that rejoices in that – a good hefty kick up the rear for those who don’t bother to make sure they’re entitled to vote. But that apart, is using the electoral register better or worse than using  population numbers?

Population numbers immediately run into the difficulty that a great swathe of people won’t be able to vote – all those under eighteen years old. But would it be possible for the Boundary Commission to exclude all those under eighteen and use the rest to count the numbers per constituency? Of course it would. But instead they’ve decided that if you didn’t register to vote last time, you count for  diddly-squat when deciding on constituency size this time. That seems to me a case of punishing the general public because of the failure of individuals to make sure they have a vote.

So in its composition, the Commission shows no respect for democracy – they’re just hand-picked from among the powerful in our society. In at least one of its criteria for creation of constituencies, it uses figures that essentially say “You didn’t vote last time, so you’re not going to matter when we create the areas from which people vote for a particular candidate”. Among other things, it shows scant faith in an individual’s ability to change his/her ways.

Most of us don’t bother much with the boundary thing,choosing to focus on  the candidates who stand in those electoral areas. Which is a pity, because boring though it may be, the base from which people are elected, and the people who make the decisions, are enormously important. Everything else rests on them. Which is probably why we’re encouraged not to think about such matters too much.

34 Responses to The Boundary Commission and democracy