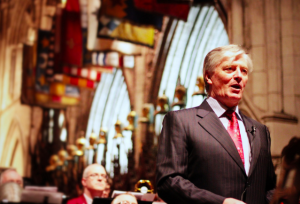 You probably know well who Pat Kenny is but perhaps some of the regulars on your blog might not. PK had been the golden boy of RTE for years and then in 2013 he joined Newstalk, which is owned by Denis O’Brien, the very wealthy man who also owns the Independent group. PK’s daily radio show with Newstalk is very much along the lines of his old RTE radio show and it seems that he is still as popular as ever.

I don’t often listen to the radio but I always had high regard for PK. He is clearly a very knowledgeable person, he is very professional and I always liked his style of interviewing. I was driving along this morning when I tuned into Newstalk and heard his interview with Eoin O Broin from SF. It has made me realise how wrong I was about PK.

The issue being discussed was water charges, which has been an ongoing problem for the government for a couple of years. It was overtaken by other issues such as Brexit but is now back in the spotlight. As you are well aware, many of the southern media show a very clear negative bias towards Sinn Fein. With PK I always expected some impartiality, or at least that he would not make it so obvious that he really is biased. This morning the mask slipped, I can now see that he is no better that the usual anti-nationalist brigade. He also displayed a nasty side to his character that I didn’t realise he had.

His tirade against EOB was a disgrace. It was more like what you could expect from Vincent Browne, i.e. bullying and obnoxious behaviour to try stifle attempts by EOB to answers the questions. The attached is a clip from this morning’s programme.

As a TD in West Dublin EOB meets lots of people on low incomes, more than PK would. That is what EOB had said in the interview and nobody can say that this is not a true statement. PK reacted like he and his Newstalk colleagues were being insulted, and then proceeded to lecture EOB in that nice Vincent Browne style. You have probably met EOB and will know that he is a calm person who can hold his ground and can engage very well in political discussions. EOB did keep calm and continued the discussion but it was very surprising and disappointing behaviour from PK.

But then it got worse. In PK’s attempts to demonise SF and their role in Northern Ireland he asked ‘what about the part they played in creating the conflict. I underline the word creating. You can hear the discussion in the attached file.

I know that most of the readers of your blog won’t be surprised to hear this but it does confirm once again that the southern media’s attitude to Irish nationalism hasn’t changed. It was only 100 years ago that the Irish Times billboard was telling the world about the Sinn Fein rebellion.

27 Responses to PAT KENNY AND SINN FÉIN by Peter Pymen