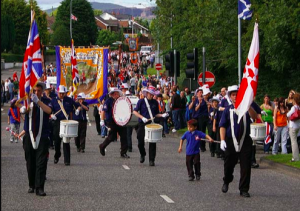 So it’s that time again. The bunting and the flegs are up, sashes are out of their boxes, the boots are polished and the uniforms are dry-cleaned, the instruments are tuned and all is ready for another celebration of the victory of King William of Orange over King James on the 12th day of July 1690 –or so the story goes. The celebration is big on symbolism and ritual. It has become a celebration of the Orange/Unionist/Protestant culture. Nothing wrong with that except when it takes on supremacist overtones – as when Orange bands play offensive tunes while passing Catholic churches and when bonfires are used to show hatred and when flegs are put up to provoke and annoy and show who is boss. Then, the Orangefest becomes a corruption of culture. Then, it becomes deliberate provocation and there’s everything wrong with that. That part of the festival needs to be rooted out. It only re-enforces the mistaken belief that the Battle of the Boyne was fought for religious supremacy in Ireland.

The Battle at the Boyne was not fought between Catholics and Protestants nor between the English and the Irish. It was a battle led by the deposed King James II and supported by the French King Louis XIV to regain control of the throne of the 3 kingdoms (England, Scotland and Ireland) which he lost when he was ousted in the Glorious Revolution of 1688 by William, the Dutchman from Orange county in the Netherlands an opponent of French king, Louis XIV. William of Orange was married to James’ daughter, Mary, who was Protestant. It was important for the mainly Protestant population in England that the monarch be a Protestant and that the heir to the throne be a Protestant. This became an issue when James fathered a son and heir. The English also feared a French invasion.

Though while they were involved in a struggle for control of the English monarchy they were also involved in the wider European struggle for control between the French and the Grand Alliance in what is known as the Nine Years War (1688-1697). The Battle of the Boyne was part of a larger conflict in Europe in which the French were seeking to control more of Europe and were opposed by among others, William of Orange, Germany, Austria and the Pope, Innocent XI, who wanted to curtail the expansion of the French king Louis XIV and the destruction of the Holy Roman empire.

Both the armies of William and James contained Protestants and Catholics. William’s army was made up of Dutch, some English, Danish and French Huguenots. William’s army of 30,000 men arrived in Carrickfergus. His fleet of 300 ships arrived in Belfast Lough on 14 June 1690.  They immediately moved south and camped around Dundalk.

James’s  army was made up of some English, Irish, French. They too had assembled near Dundalk and then moved back towards the Boyne river for more security. Most Irish supported James because he promised religious freedom and self-determination.

There’s a story, I heard from Fr Des Wilson, about King Billy. Just before the Battle of the Boyne King William hired a local boatman known as ‘Sean the Boatman’ to take him across the river. Sean is alleged to have asked King William what he thought of his chances of defeating King James. William is supposed to have answered: ‘Always remember, whether I win or whether I lose, you will still be Sean the Boatman.’

7 Responses to ‘Why did Pope Innocent XI support the Orange?’ by Joe McVeigh